Lucas Johnson’s painting Volcano Series No. 3 (1991) depicts a dark green mountain split open down the middle. Bright red lava flows down the split carrying black rocks and large cubic slabs which appear architectural in nature. These slabs look like sandstone and two of them are embedded with staircases.

The painting instantly captivated me. I’ve always felt entranced by lava. Its bright orange red tone is so luminescent that it serves almost as a warning sign, though any soul close enough to witness its flow has likely already asphyxiated from the fumes. Is there any force in nature more hell-bent in destruction? At its core, pyromania is nothing more than a fascination with utter destruction.

This picture is surreal because the lava is so thick with undissolved debris, unlike any photograph of lava that I’ve seen. The sandstone blocks look out of place floating in the molten torrent. They appear Egyptian in origin but the mountain is green, indicating plant life and a location away from the Egyptian desert. The painting depicts the mountain at an upward angle to the viewer in order to create a sense of gravity, yet there is no direct indication of motion within the lava. The biggest sandstone block at the very bottom of the frame may even be blocking its flow. 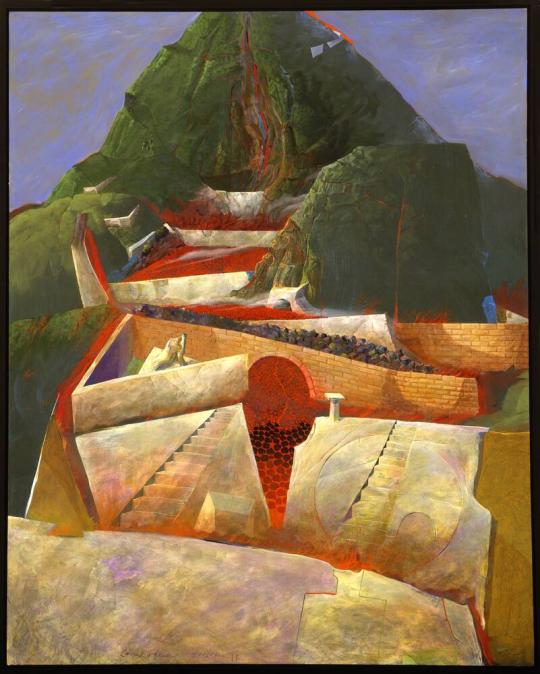 I think Johnson intended to create a juxtaposition of the natural world and its struggle to compete with the man-made world, classically known as the conflict of Man vs. Nature. Lava normally creates a path of utter destruction but the blocks in the painting appear whole and largely undamaged, perhaps even standing a chance of winning the fight. He does portray one side as the deserved victor. In blending the two worlds into one, Johnson is stating that their coexistence is natural.

Superfund sites are hazardous contaminated areas that are in need of long-term cleanup. The Kin-Buc Landfill in Edison, New Jersey is just one of the many superfund sites in the state (EPA Superfund Program: Kin-Buc Landfill). Now an inactive landfill, the 220-acre site was active from the late 1940’s up until 1976. From 1971 to 1976, the landfill was used for municipal, industrial, and hazardous waste. Hazardous waste was accepted up until 1976 and was discontinued when the state revoked the landfill’s permit for violating environmental regulations. The hazardous liquid waste that was dumped at the site seeped into nearby creeks, resulting in Polychlorinated biphenyls (PCBs) pollution (EPA Superfund Program: Kin-Buc Landfill).

PCBs are organic chlorine compounds that form oily liquids used in electrical equipment such as transformers and capacitors. PCBs are also found in hydraulic fluids, heat transfer fluids, lubricants, and plasticizers. These chemicals were used due to their resistance to extreme temperature and pressure. In 1977, the production of PCBs came to an end and by 1979, the EPA officially banned the use of PCBs due to their negative environmental and health effects (Illinois Department of Public Health).

The Kin-Buc Landfill is highly contaminated with PCBs. These chemicals pollute the air, water, soil, and sediments within the area. Nearby bodies of water such as Edmonds Creek, Rum Creek, and the Raritan River all have PCBs detected in their waters. Other pollutants such as volatile organic compounds (VOCs) and heavy metals have been detected at the landfill as well (EPA 2016).

The purpose of this essay is to identify how PCBs are released into the environment, the effects of PCBs on the environment, and solutions on how to stop PCB emissions as well as how to degrade the chemical. The Kin-Buc Landfill will serve as an example of how PCB pollution takes effect on the environment, as seen in figure 1. END_OF_DOCUMENT_TOKEN_TO_BE_REPLACED

The Labor movement’s explosive growth in the 1930s was a direct result of the National Industrial Recovery Act’s Section 7a putting protections in place for organized labor, but this growth would not have occurred at the same magnitude if the working class had not been largely homogenous at the time. Workers were able to organize in large numbers during the Great Depression because many of the divisions inside of the working class had disintegrated by this point. The high unemployment rate led workers to value their jobs more than ever; they sought to improve their quality of life through demanding better treatment from employers and they slowly won this fight, one battle at a time.

END_OF_DOCUMENT_TOKEN_TO_BE_REPLACED

Cryptography is an essential part of the internet, allowing the secure transmission of private data through public networks. The field of cryptography is focused on the encryption and decryption of data. Encrypted data should ideally not be able to be decrypted by anyone other than the intended recipient (Savu). While ciphers for accomplishing this started out as simple substitution algorithms, they evolved along with technology to eventually become the complex ciphers found today like AES. The RSA standard marked the beginning of the popularity of public-key encryption (Savu). In this schema, the client and server have both public and private keys which can be used to encrypt and decrypt private communications as well as sign documents to verify one’s identity (Olzak).

Public key certificates provide a method for verification of identity. The most common and important use of public key certificates on the internet is SSL on websites—i.e. HTTPS-enabled sites (Savu). SSL provides security to both clients and servers; without it, data sent between a client and server can be intercepted in plaintext. Without SSL, user accounts on websites would be completely insecure; any important internet activities like financial transactions would be unfeasible. Through this technology, public key certificates allowed the internet to progress past the web 1.0 era into the extended user interaction of the current era.

Encryption alone is not enough to ensure the total security of a system. In order to ensure the most security possible, vulnerability to interception must be minimized and implementation of the encryption process itself must be flawless (Olzak). Enterprises should be wary of relying solely on encryption for security and should look into tightening measures surrounding the encrypted data (Olzak).

Cryptography is a large part of the internet’s backbone, providing a means for secure transmission of data. Without encryption, the internet in its current form would be unable to exist. Not only do user-interactive sites rely on it, but so does the backend of all servers. If all data were transmitted in plaintext, cyber attacks would be easy and constant. A strong encryption standard as well as implementation is necessary if total security and privacy is to be achieved.

It’s the tail end of a gorgeous summer day in Coyoacán. It’s August 20, 1940; the Communist revolutionary Leon Trotsky and his wife Natalia Sedova are drinking mint tea in the garden of their villa in this rural borough of Mexico City. They’re sitting on a stone bench under the shade of many tall royal palmetto trees, facing the garden of tropical flowers and rare cacti which Trotsky has meticulously cultivated these past few years. Thoroughly-needled tubes of mammillaria glochidiata cacti are backed by a shrub of pink dahlias with thousands of small tongue-like petals. Clucking comes from their nearby enclosure of chickens and the resonant plucking of a guitarrón is heard in the distance.

The stress from years of exile has aged the pair. Both of their hairs have faded to gray and Trotsky has put on a few pounds. The quiet lifestyle of this Mexican villa suits them, however, and it shows in their relaxed apparel. He is wearing a sleek white button-down and gray trousers (having ditched the suit jacket in this climate) and Natalia is in only a thin striped blouse and a long black skirt.