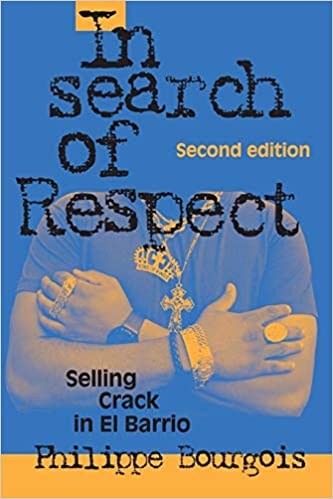 Anthropologist Philippe Bourgois lives in El Barrio (an impoverished neighborhood in East Harlem, then mostly populated by Puerto Ricans) from 1985 to 1990 and befriends a network of crack dealers. Through transcriptions of tape recordings combined with historical contextualization and socioeconomic analysis, he paints a vivid picture of broken families who want out of this lifestyle but face countless hurdles from institutional racism. Generational trauma is maintained by a cycle of physical/sexual/emotional abuse and drug addiction. The characters are not easy to like yet their humanity is made obvious.

Philippe mostly does a good job of balancing observation with analysis, though some of the academic portions feel a bit overwritten. I also would have appreciated a distinction between the footnotes that are merely citations and those which contain highly pertinent narrative information; some of them should have been directly included in the chapter instead. Another shortcoming is the bias towards the male perspective; Philippe acknowledges this as the result of a relative difficulty in conducting private interviews of women in the patriarchal Nuyorican culture, and repeatedly challenges the misogyny of his male friends. The epilogues with follow-ups from 1995 and 2003 are easily the most depressing part of the book.

Several women criticized the hypocrisy of the street culture that condemned them while eagerly making money off them. None of them, however, criticized the society that refused to fund treatment centers and support services for them. As a matter of fact, we were unable to refer any of the desperate women we befriended to drug treatment centers, because only two of the twenty-four state-funded programs located in New York City at that time (1990) accepted pregnant crack users.

It was not until I moved out of El Barrio that it occurred to me that mothers on crack could be reinterpreted as women desperately seeking meaning in their lives and refusing to sacrifice themselves to the impossible task of raising healthy children in the inner city. Pregnant crack addicts can be de-essentialized from the monstrous image of the cruel, unfeeling mother, and be reconstructed as self-destructive rebels.